The “leak“– this time from the German Ministry of the Interior – shows a “secret” 93-page document, admitting basically how badly Germany reacted to the corona hoax – no, the paper doesn’t call it a ”hoax”, but you can taste it between the lines. In essence it says the economic and social collateral damage is much, but much larger than the impact of COVID-19- in terms of lives lost due to postponed treatment for cancer, heart and other life-threatening diseases, collapse of social infrastructure, despair, suicide, joblessness – no future in sight… for many the world just collapsed like a house of cards – no perspective nothing.

The paper also refers to other corona outbreaks from earlier years, and “regular” flu epidemics, which were much more serious than the 2020 one – the latter, COVID-19, denominated by WHO as a pandemic – under orders of the mighty behind the WEF -The World Economic Forum – the infamous Davos Club, to which also Bill Gates belongs, the vaccine tsar, who stated in a February 2010 Southern California TED Talk entitled “Innovating to Zero” –

Please, for your own sake and for that of your children and children’s children, keep this always in mind, when you hear Bill Gates and vaccination. The one that we are all risking to be “forced”  to get – is the one against COVID-19.

Would you trust Mr. Bill Gates – for any vaccine, actually for any health advice?

But, it gets better (or actually worse), he basically makes WHO’s health policies as far as vaccination goes, literally wiping out (excluding) any other medically and scientifically proven preventive and curative measures.

Why? Because The Gates Foundation is one of the key financiers of WHO’s budget, in addition to Big Pharma and other interest groups, especially GAVI (Global Alliance for Vaccines and Immunization) – another creation of Bill Gates. Telecoms are also among the contributors of the WHO’s budget.

The Telecoms are rolling out clandestinely the dangerous and untested and understated 5G (fifth generation technology) which cellular phone companies began deploying worldwide- to better control you – and about which WHO – the world’s foremost health agency – has not said a word, with regard to health impacts of 5G.

That’s the way it goes in our neoliberal-leaning-to neo-fascist – everything-goes world.

Back to the German Interior Minister, Mr. Horst Seehofer. His study team of experts finds that the Covid disease was of lesser importance than for example the flu of the 2017 / 2018 season. The study also looked at death statistics and found that the overall death rate in Germany from all causes is comparable to that of previous years and lower than that of the last big flu 2017/2018 season, which went virtually unnoticed. There are no extra deaths, as the German statistics and covid-accounting would indicate with the official 8,522 death toll as of 2 June 2020.This would be a significant spike as compared to previous years – which however, isn’t reflected in the statistics.

In essence the study concluded – politely – Covid-19 was a huge False Alarm. When the Minister’s spokesperson was confronted by journalists about the leaked paper, he said something to the effect – we are not discussing anything with conspiracy theorists. Total denial. – Why?

The team of scientists that elaborated the report for the Interior Ministry (Bundesministerium des Innern – BMI), was flabbergasted, when the Ministry distanced itself from their report. The research team issued a Press Release, triggered by the leaked document – even though it, the BMI, signed off on the scientists’ report. See this (from RT Deutsch [Germany], in German).

The Press Release basically said that the corona-virus was a treatable respiratory disease, not deadly, that it could be prevented and cured; that risk groups, the elderly and those with chronic illnesses, would need to get special attention and treatment; that there was no need to lockdown the entire country to overcome this corona virus, thereby destroying the economy and livelihood of millions of people – which would have a collateral damage way out-weighing the number of corona-victims. For example, postponed cancer and heart operations, due to keeping hospital beds empty for Covid-Patients, may account for between 5,000 and 125,000 early deaths. This does not account for the countless deaths from hopelessness, despair and suicide.

This list of highly reputed medical professionals is testimony of the seriousness of the report-which by the way came to very similar conclusions than did other studies in other countries, including in the US and in Russia.

For example, on 26 May, Dr. Alexander Myasnikov, Russia’s head of coronavirus information, gave an interview to former [Russian] Presidential candidate Ksenia Sobchak, in which he apparently let slip his true feeling. Believing the interview over, and the camera turned off, Myasnikov said:

“It’s all bullshit […] It’s all exaggerated. It’s an acute respiratory disease with minimal mortality […] Why has the whole world been destroyed? That I don’t know,”

This begs the question – the imminent question – is there a connection between the corona disaster with the world economy and people’s livelihoods destroyed and the racial riots triggered by the savage police killing of an African American – Mr. George Floyd – in Minneapolis. Riots that within days have spread to over 40 US cities, violence no end. On the weekend the riots have spread to London and Berlin, so far mostly peaceful.

Tuesday evening, 2 June – tens if not hundreds of thousands have taken to the streets in French cities, including at least 20,000 in front of a ‘Palais de Justice’ – (a justice or tribunal building) in the north of Paris.

The protests were generally against police brutality, against racism and against the senseless and devastating lockdown – which in France and most of the rest of Europe, is still not totally over, despite all scientific reports and recommendations – let alone those from economists – that there is no danger – and that the economy should now be boosted, so it may pick up fast.

Already now – with only the tiny tip of the iceberg visible – the world is facing 2 billion people out of work in a few months (ILO up-date) – drifting towards famine despair – and death – from famine, suicide, neglect desolation- hopelessness…. Yes, Mr. Gates – so far, the crisis works in your favor. But justice will prevail. Whether with you or without you. People are waking up.

Is it coincidence that the German Interior Ministry does not accept the report established by its own team of experts? – Admitting the “false alarm” as the report calls it, admitting the over-reaction and immediately counter-act to revive the economy, to support laid-off people, to help grappling small- and medium size enterprises back on to their feet- to avoid the worst – that might have spared Germany from riots- and may have made example throughout Europe on how to react. But no.

It is as if riots were what is wanted throughout the US, where President Trump has threatened militarizing the country and has already sent troops into Washington DC, where riots are burning literally holes into entire neighborhoods of the city- violence is rampant in this predominantly colored capital city of the US of A. – And as if riots were also wanted throughout western Europe, with the same objective – chaos, that will require military intervention and eventually Martial Law.

Violence in Europe, is it gradually moving from country to country? Is it coincidence, or planned? And who finances these riots? – The organization Black Lives Matter which is involved in campaign and riots in the US (among others), is amply funded by Soros, Ford, Rockefeller and other One-World-Globalists, so was Occupy Wall Street – and so are most ‘protests’ at G-20 and G-7 meetings including the World Social Forum (WSF). 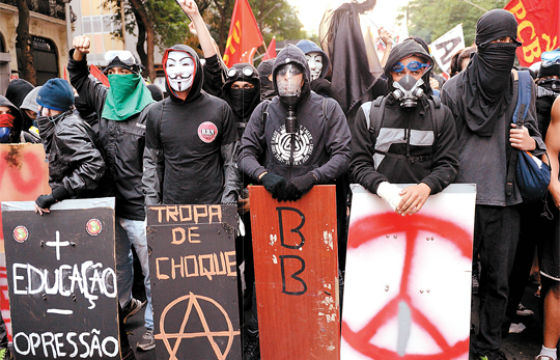 The “Black Blocs” are  people, who are actually either themselves policemen or hired by the police to justify the violent police interference. – Remember the Yellow Vests – more than a year of weekend-demos before corona put a halt to the movement?

What is being planned is sheer urban warfare. And Europe feels prepared for it. There is the European Corps (Eurocorps), an intergovernmental military corps with its headquarters of approximately 1,000 soldiers stationed in Strasbourg, Alsace, France.

The Eurocorps is operational since 1995.

They have been trained for urban warfare, along with other European special forces, mainly at a NATO-supported urban military training camp in Saxony-Anhalt, Northern Germany.

Is this planned move of riots throughout the Global North – maybe also spreading to specific countries of the Global South – Step One of the “Lock Step Scenario” – 2010 Rockefeller Report which starts with a corona pandemic in 2020 – towards total military control, towards Martial Law – towards suspension of all civil and human rights; suspension of our constitutional rights? – Who knows. It’s an evil plan.

Germany could have stopped it. This medical expert report provided the basis for an honest admission – for stepping out of the “Lock Step” – it might have still been time. Sticking to the people. Admitting the mistake – the rest of Europe would follow and the monster project of the deep dark evil state would falter. But Germany seems to have missed the boat – or the opportunity of being THE Peace maker. By coercion or free will? But what kind of coercion could force a Government like that of Germany into this diabolical submission?

Otherwise, will it again be the Germans like 75 years ago, after WWII, when the majority of Germans said “we didn’t know” – will we experience a “Déjà-Vu” – 20 or 30 years from now?

We are waking up, with or without the German Government.

But the German people are with Us, the People.

And we shall overcome, the man-made corona crisis, and the purposefully man-fueled racial riots – as well as their “amalgamation”.

We want to live a free life.

We want to rebuild our willfully destroyed social- and physical infrastructure – we want to be free.

No more surveillance – and enslavements by the Gates, Rockefellers and Rothschilds of this world.

We do not accept force-vaccination. We want to be free to choose. We do not need, nor do we want a One World Order. And if it is a New World Order, it is We, The People, who are going to design and build it.

We are sovereign beings – and will create our sovereign states on the basis of new-found solidarity for a common future among mankind.