In the days before he went into lockdown, John J. Lennon sent this dispatch from Sing Sing, on how the maximum-security prison was preparing for the inevitable arrival of COVID-19.

On the afternoon of March 14, in the conjugal compound at Sing Sing Correctional Facility, in New York, I was chilling out on the couch with my partner, coronavirus talk on the television in the background. The phone rang. It wasn’t count time, so I grew worried.

The voice on the line said to step outside, where the security superintendent was waiting. He told us that our conjugal weekend was cut short due to the COVID-19 pandemic. All visitations at prisons statewide were suspended until April 11.

Sing Sing was going into quarantine.

Our movement was limited. No gym. Hospital and commissary runs limited to groups of ten. Staggered seating in the mess hall.

Yet the measures appeared to roll out inconsistently. On Tuesday evening, I found as many as 150 guys gathered in the yard. Elbow bumps had replaced fist bumps and pound embraces, but all else appeared normal. They knew that wouldn’t last, and wondered why the corrections officers weren’t required to wear protective masks. That should be the priority, my peers reasoned, not preventing prisoners from getting a little fresh air.

We only later found out that while we’d talked in the yard, the Department of Corrections had confirmed that an employee at Sing Sing had tested positive for COVID-19. The virus had arrived.

A couple of weeks ago, I woke up in my cell with a fever and chills. I was alarmed, like anyone feeling sick these days. I retraced my steps. A few days earlier, on line for the phone on our tier, I’d watched a fella who lives a few cells down from me talking and coughing, sloppy and phlegmy. He’d pulled a sock over the handset, an attempt to block his germs from coating the receiver.

I dropped a sick-call slip that night.

“Sick call leaving the block,” crackled a voice over the PA the next morning. I’d sweated out the bug overnight, but figured that I go for the walk anyway, curious to see how the medical unit was prepping for coronavirus.

As I walked through the white halls of the hospital, I passed a Corcraft hand-sanitizer dispenser. Corcraft supplies prisoner-made products to government agencies and affiliates—government offices, non-profits that receive tax dollars, prisons and jails. I’d seen the dispensers here and there around Sing Sing, mostly where civilians worked, never in the cellblocks where us prisoners live. The foam supposedly kills 99% of germs. I pressed the lever and nothing came out. The dispenser was empty.

I stood on a red line to see the sick-call nurse. A man with a kind face, in scrubs, called me into the office. I told him that I was feeling better. Then I went into reporter mode: “What was the plan?”

Inmates with serious flu-like symptoms, he told me, were being quarantined and swabbed for influenza. 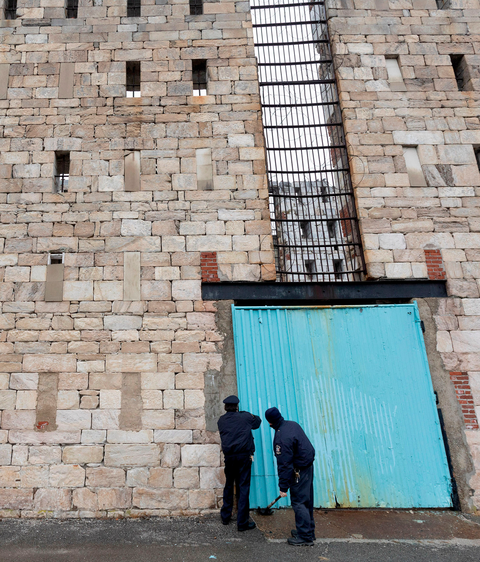 Prison employees open a door to a former cell block at Sing Sing.

“But we’re concerned about coronavirus,” I told him. “Do you have those tests yet?”

“Everybody’s concerned. I have kids….” He caught himself. “But no, we don’t have the tests yet.” On my way out, he gave me a few packets of ibuprofen and a bottle of Robitussin, in case my symptoms returned, along with a few alcohol pads.

Sing Sing is on the east bank of the Hudson River, in Westchester County. Behind a thirty-foot wall, 1600 of us live in close quarters on open-tier cellblocks stacked four or five floors high. In here, there is no such thing as “social distancing.”

On March 5, a memo from the Department of Corrections was posted to the bulletin board at the front of my tier, about a few simple ways to keep safe from COVID-19: Wash your hands for twenty seconds; avoid touching your face; cover coughs and sneezes with your elbow; stay away from those who are unwell; if family or friends are sick and plan on visiting, tell them to reschedule.

I started to wonder who would unknowingly carry the virus to breach the walls of Sing Sing. A prisoner’s wife coming to visit, their kids in tow? (New York allows brief and respectable contact during visits, such as hugs and kisses.) One of the approximately nine hundred corrections officers who rotate in and out of the facility during the three shift changes each day? A teacher who sneezes on an incarcerated student’s algebra assignment before returning it? A maintenance worker, or a cook, or a commissary cashier?

On March 9, New York State governor Andrew Cuomo announced that Corcraft would ramp up the production of hand sanitizer and distribute it to communities across the state. The prisoners manufacturing it would likely be paid extra, but that wasn’t likely to amount to much. Herbert Long, who locks a few cells down from me, used to have an industrial-caustics job when he was at Great Meadow, in Upstate. “It’s like a factory job,” he told me. “Punch in, work your station. Make the quotas, punch out.” He’d made 26 cents an hour.

Now, there was even less chance that the sanitizer produced by our peers up north would end up being used to refill the empty dispensers at Sing Sing.

Aprisoner at Sing Sing who I’ll call Pac has a patent pending on an invention to prevent the spread of germs in the joint. Prisoners come up with great ideas all the time, but few carry through. Countless times, Pac has rested his elbows on my cell bars and rambled on about his latest concepts. His thoughts come rapid-fire. Usually I nod along. This time, I’m listening.

Look down the phone line at any prison in America, and you’ll see prisoners holding socks. When it’s you’re your turn, you pull the sock over the handset. Lately, some guys have brought nasal-spray bottles filled with bleach and water, which they use to wipe everything down. A primitive form of preventative health.

Pac has designed a hypoallergenic, rubber-compound mold that fits over the handset. Prisoners could bring it with them every time they used the phone. Commissaries could sell them. Pac hopes to pitch the Department of Corrections on buying them in bulk and distributing them statewide. He knows there’s a market and he has done the math—thousands of jails and prisons, hundreds of thousands of phones between them, millions of prisoners using them.

Pac, a fifty-something Dominican dude from Washington Heights, looks like a tattooed tank. He’s been incarcerated for twenty-seven years. He grew up as a Jehovah’s Witness and then got sucked up in the life in the eighties, running with a crew who sold the crack cocaine. All of them wound up dead or in prison.

Pac filed the provisional patent on his own. It cost a few hundred bucks. Then he tapped some friends to hire InventHelp, which analyzed similar products. That cost $800. Another friend hired the law firm Holland & Knight to bring home the utility patent. That cost another $15,000. If the patent comes through, Pac should be cleared to bring the product to market.

Recently, a crew of porters were sent to the second floor of a building in Tappan, a decommissioned medium-security compound within the walls of Sing Sing. There, one porter told me, they received orders to “G.I.”—clean so well that the military would approve—a room with around 100 beds and a communal bathroom. The space would be used to quarantine sick prisoners.

They scrubbed the bathroom, mopped the floors, wiped the lockers and bedframes, painted the walls, and brought in new mattresses. (We are lucky, in a way—most prisons don’t have a vacant dorm conveniently available for quarantining.)

“Which cleaning agent did you use?” I asked the porter.

“You know, the green shit.”

The green shit is Germicidal Cleaner 128, also made by Corcraft. It is the go-to cleaning product in New York prisons. Barrels of the stuff are stored at Sing Sing. Lately, he said, porters have been issued twice the normal amount throughout the facility, and at a higher potency. The instructions recommend diluting 1.5 ounces with a gallon of water, but the containers going out now are 50% germicide, 50% water.

Porters assigned to the visiting room were hard at work, too. Microwave knobs, vending machine buttons, tabletops, chairs, the Legos and action figurines in the children’s area—everything was getting sprayed and wiped with Germicidal 128.

Then spray bottles of bleach were issued, the porter told me. Germicidal Cleaner 128 is powerful, but it doesn’t get rid of everything. Bleach does.

Which is why you couldn’t walk through Sing Sing in the past week without catching whiffs of germicide and bleach mixed in with body odor, cigarettes, weed.

But the virus still came. No one knows when it will go away, nor what destruction it will have left behind.